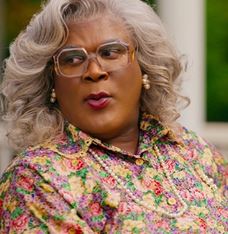 Mable “Madea” Simmons is easily Tyler Perry’s most recognizable character. Considered by some to be America’s favorite grandma, anyone familiar with the brash matriarch knows she first appeared in Perry’s 1999 stage play I Can Do Bad All by Myself before making her feature film debut in 2005’s Diary of A Mad Black Woman. This pistol-packing, brutally honest and often foul-mouth matriarch and unlikely icon, went on to anchor a 10 movie franchise.

2019’s A Madea Family Funeral and the play Madea’s Farewell Play were supposed to be the final outings for Madea, Perry told the New York Times. However, Perry soon realized he just couldn’t quit his curmudgeonly grandma. Madea’s coming out of retirement and straight to Netflix. Here’s everything you need to know about her debut on the streamer in A Madea Homecoming.

A Madea Homecoming will be Madea’s 11th movie and 12th appearance in a Tyler Perry production, premiering on Feb. 25 as part what’s new on Netflix’s this February. Madea movies are known for tough love, life lessons delivered with a heavy hand and broad, sometimes off-color, comedy.

As of now, there are no plans for Madea’s latest movie to have a theatrical release. Although a proponent of the theater experience, Perry noted to Variety that it was “never part of his conversation with the company.”

This marks Perry’s second collaboration with the streamer (A Fall From Grace) and will be followed by his passion project, A Jazzman’s Blues starring Joshua Boone and Solea Pfeiffer.

Perry wrote this latest installment of the franchise. The story revolves around Madea’s great-grandson’s college graduation. As is to be expected, this moment of celebration turns into an unveiling of secrets that leads to drama amongst the family. All the upheaval threatens to destroy the happy homecoming.

Perry updated the storyline from the Farewell Play and incorporated touchy issues from the Black community, and other socio-political topics into the script. According to his comments to Entertainment Weekly, there’s even an arc centering a lead character coming out to the family.

In addition to writing and directing A Madea Homecoming, Perry will once again star in this latest installment of the franchise.

From the looks of the official trailer, Perry’s banking on Madea being able to raise questions and address taboos in between the laughs and hijinks.

The promotion leading up to the release has been a series of gag images featuring Madea spoofing big moments in recent pop culture news, like Adele’s exclusive interview with Oprah. It’s a big clue that her signature lampooning and leaning into the contemporary for both its commentary and it’s laughs is likely to continue as the storyline staple.

How to watch Madea-verse movies

After 10 installments and a two-year break, it may just be time for a refresher on the Medea-verse. Many of the movies are available for streaming on Prime Video. But if you’re looking for just a recap, the Netflix Film Club’s got you covered.

Get up to speed on the timeline and the whole varied cast of characters before Feb.  25.

Ro is a freelance entertainment writer, film/tv critic, and co-host on the MTR Network’s podcasts. She’s a member of the San Diego Film Critics Society and the Online Association of Female Film Critics. She’s a former culture columnist for San Diego CityBeat (may it rest in peace) with a serious addiction to genre fiction, horror, and documentaries. You can find her sharing pictures of her book shenanigans on instagram or talking entirely too much -ish on Twitter.