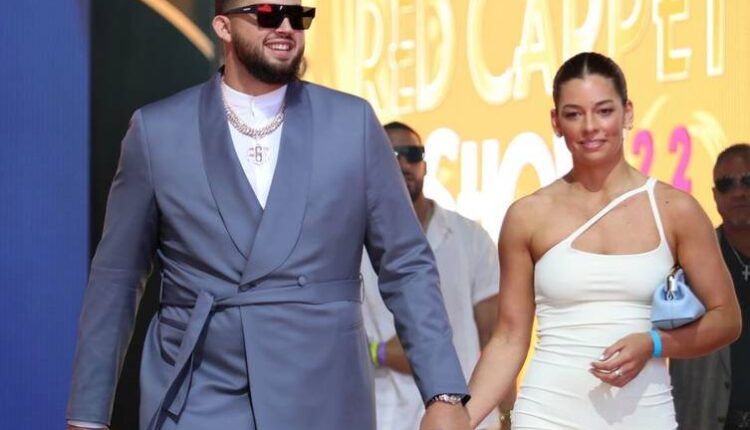 Toronto Blue Jays pitcher Alek Manoah “made it drippy” at MLB All-Star weekend with his girlfriend Marielena Somoza by his side.

The couple documented their VIP experience — from a private jet to the red carpet — during the star-studded festivities in Los Angeles.

Manoah — whose AL team defeated the NL in a 3-2 victory at Dodgers Stadium — and his girlfriend first boarded a private jet to Los Angeles, which was stocked with Hennessy. Alek Manoah and girlfriend Marielena Somoza arrive at the MLB All-Star Game red carpet. Getty Images

Manoah shared a series of TikTok posts that showed him getting dressed for the red carpet, where he looked dapper in a gray-belted suit and a pair of MCA university blue Nike x Off-White Air Force 1 sneakers.

The newly named BioSteel ambassador rocked a diamond chain that included his Toronto No. 6. and showed off his designer Rolex watch.

Somoza, who sported an up-do on the red carpet, stunned in a white one-shoulder bodycon dress and open toe heels with ankle straps.

The couple was all smiles as they made their way to the red carpet in a behind-the-scenes video posted by the pitcher.

At one point, Manoah and his girlfriend posed for photos with Astros pitcher Justin Verlander and his supermodel wife, Kate Upton. Somoza reposted the snap, among many others from the star-studded weekend, to her Instagram story.

The Blue Jays also shared a video of the couple on the red carpet, surrounded by Manoah’s family cheering his name.

Manoah paid tribute to his family with his red carpet look. The 24-year-old showed off a collage of photos on the inside of his suit jacket, which featured his “loved ones” — coaches and family — that helped him get to the MLB All-Star weekend.

Once the game started, Manoah shined in his first All-Star appearance. Manoah struck out the side in his lone inning and also kept viewers at home entertained while mic’d up.