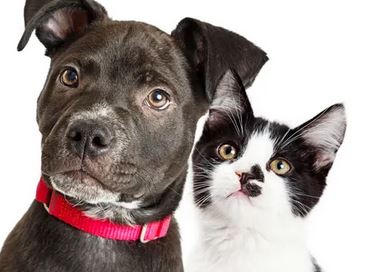 Are you more of a cat or a dog person?

It is a common idea that everyone is a dog person or a cat person. You’re either drawn to dogs or drawn to cats—there is no in-between.

In this article, we’ll dig into the idea of preferring cats vs. dogs. We’ll also look at how to tell whether you are a cat person or a dog person.

How Entrenched Is This Idea?

The idea of being a cat person vs. a dog person is powerfully entrenched in society. Many personality quizzes will ask which animal you prefer. Some people base quite a bit of their identity on their love of cats or dogs. This also creates a false dichotomy between cats and dogs.

While they aren’t really opposites, they are often treated like they are. Often, people will identify as either a “cat person” or a “dog person,” no matter the actual pets they own. Sometimes, the person will own both cats and dogs, but they will claim that they prefer one to the other (even if they also claim to love all of their pets equally).

In the end, this idea has become heavily entrenched in our culture.

The Scientific Evidence for Cat People vs. Dog People

Surprisingly, there are quite a few studies that have been done on the personalities of cat people and dog people. One study was performed in 2010 by the University of Texas. This study found that those that identified as “dog people” were more social, while “cat people” were more “open”—meaning creative and nontraditional.

A similar study was shown that cat people were more likely to have a higher blood pressure than dog people.

However, that doesn’t mean that being a dog person or a cat person actually causes these differences. People that are more energetic and outgoing are more likely to prefer dogs. It’s less likely that dogs cause someone to become more energetic.

The easiest way to determine whether you are a cat or a dog person is to consider which animal you prefer the most. If you don’t particularly prefer one to the other, you might not be either a cat person or a dog person. It is possible not to belong to either group.

If you’re either a cat or a dog person, you’ll probably know. This usually isn’t something you have to figure out one way or another. You typically know whether or not you are a cat person or a dog person.

The pet you like more typically reflects your personality. You tend to like pets that act like you do—or reflect your personality and outlook. It is sometimes characterized that dog people prefer to have more submissive pets—which cats aren’t in the least—so they are more likely to have dominance-related personality traits.

However, if you don’t like one animal over another, that doesn’t mean something is wrong with your personality or worldview. Some people just don’t fit nicely into one category or the other!

What to Know About Yawning