Can I Have a Pet Bat? 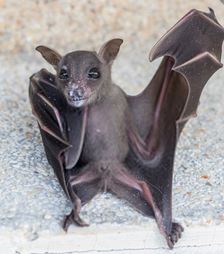 Bats are fascinating creatures that are occasionally sought after as pets. Bear in mind, however, that bats are wild animals. They act differently than domestic dogs and cats. Bats cannot be taught.

There are numerous factors to consider before bringing a bat into your home. In the United States, it is illegal to keep certain types of bats.

A bat can be kept as a pet. Bats, unfortunately, do not fare well in cages. In the wild, these mammals do better. To keep strong, bats must fly large distances. A confined bat is therefore weaker than one found in the wild. They must also live in a colony in order to survive. A wild bat can live for up to 30 years, whereas just a few pet bats make it past a year.

Bats require special attention, housing, and food. They are complex animals that are nearly impossible to properly care for, even if you wanted to. Many people have attempted it and ended up with a dead bat after a few weeks.

Who Is Anri Okita? Biography, Wiki, Net Worth, Age,…

Bats are one of a kind creatures. Taking them out of the wild is not advised. Bats are protected by a number of laws, and the federal government regulates bat transfers. Interstate rules make it illegal to transfer them without a special permit. To handle bats, you may require a permit from the Animal Health Inspection Service of the United States Department of Agriculture (USDA).

Here are some questions to consider about if you decide to have a bat as a pet:

The diet of a bat: Bats eat a variety of foods, depending on their species. The age of the bat has an impact on what they eat. The following are some of the foods that bats enjoy:

Rabies: Bats, like many other wild animals, are susceptible to the rabies virus. A small, seemingly insignificant bat bite can transmit the virus. This means that you must be vaccinated against the virus before acquiring a pet bat. A disease bat may also infect other domestic animals in the house. Even if protected against rabies, a person who is bitten by a rabid bat or other animal will require special attention. It’s not as simple as getting a rabies shot.

Bats can transfer deadly viruses including Hendra (to horses), SARS, and Ebola to other mammals, in addition to rabies. Because bats have such a strong immune system, they are immune to these infections. It protects them from a wide range of viral infections. Other animals may suffer serious health problems or possibly die.

Sociability of Bats: Bats (particularly females) can create close bonds with one another. Friendships between flying mammals can persist for years. This is how they manage to keep their vast colonies together. Bats are known to rub their noses against each other as a sort of bonding, according to research. They also use calls to pass on information.

Nocturnal: Bats are nocturnal animals. This means they spend the day roosting (hibernating) in caves or trees and come out to feed at night. Because of this, they are both fascinating and misunderstood by many. Bats are among the most enigmatic creatures. In some areas, such as Missouri, killing a bat is unlawful unless it is destroying your property.