Do Ruby and Jasmine break up in On My Block season 4? 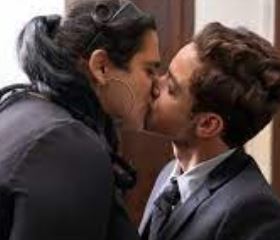 On My Block season 4 is now on Netflix, and we’re sad to see this teen comedy-drama come to an end. After watching the final season, we were shocked by how everything came together and wrapped up. In the final season, we see some relationships come to an end, and some relationships rekindled. Are Ruby and Jasmine the unlucky pair that break up in On My Block season 4?

Last we left off in season 3, we see a flash-forward of two years with the core four split up. This was very emotional to watch because the gang had such great camaraderie. We loved watching the gang together solving mysteries such as RollerWorld and Lil Ricky.

However, in the final moments of season 3, we also see Ruby and Jasmine in a full-fledged relationship, and we couldn’t be more excited! Since the first season of the hit Netflix original, Jasmine had been pining over Ruby. Even though Ruby didn’t initially see Jasmine in that way, he begins to see her in a new light in season 3.

Since Ruby and Jasmine ended up together at the end of season 3, many people were curious to know how their relationship would go moving forward in On My Block season 4. After starting the final season, it doesn’t take long for viewers to see where Ruby and Jasmine’s relationship is headed.

Do Ruby and Jasmine break up in the final season, or do they stick by each other through thick and thin? Find out down below.

Do Ruby and Jasmine break up?

What started as an odd pair became one of the best couples on the hit TV show, besides Monse and Cesar, of course.

After everything Ruby went through, it was nice to see him finally have happiness in his life. Jasmine had been rooting for Ruby and hoping the best for him since season 1, but Ruby just wouldn’t give Jasmine the time of day.

Now in On My Block season 4, we see them as a lovey-dovey couple who can’t keep their hands off each other. Well, at least at the beginning. Unfortunately, their honeymoon phase quickly comes to an end in episode 2 of season 4.

When Ruby starts to notice that Jasmine is very overbearing, he speaks up, and it leads to a big argument that ultimately ends with them breaking up.

At the start of the final season, Jasmine chooses what Ruby wears, speaks for him, and tells him what to do to win senior class president. Ruby couldn’t be himself and felt smothered.

He constantly tells Jasmine that he’s not her puppet. But because he loves Jasmine and the physical benefits that come along with their relationship, he lets his concerns go. Until episode 2, that is.

It was gut-wrenching to see their relationship go south so quickly. However, we eventually get to see Ruby and Jasmine back together in some way.

Do Ruby and Jasmine end up together in On My Block season 4?

Technically, they don’t end up together. However, shortly after their break up, they became friends with benefits. Somehow, they managed to keep up their physical relationship through the rest of the drama of the season.

With time apart, Jasmine realized how important self-care is. When she was with Ruby, she was so caught up in Ruby that she was neglecting herself. After their breakup, she learned new things about herself.

Then after finding out that she got into Berkeley, it became clear to her that her and Ruby’s future don’t have to align necessarily. She can go to her dream school, and he can go to his.

We thought that this unlikely pair would surely get back together by the end of the season, but the writers chose to take their story in a different direction.

If we’re being honest, the way their story ended made sense because they’re going to different colleges and long-distance relationships, especially as young as they are, never really work.

We’re going to miss seeing Monse, Cesar, Jamal, Ruby, and Jasmine and the many mysteries they solve in On My Block, but we know that it’s time for their story to come to a close.

Be sure to stream On My Block season 4 now on Netflix!