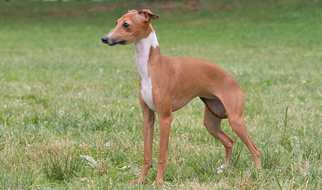 The Italian greyhounds is small breed of dog belonging to the gaze hound group, gaze hound dogs and those types of dogs that hunt primarily by sight and speed, rather than scent and endurance, the Italian Greyhound is the smallest of the gaze hounds typically weighing about 3.6 to 6.8 kilograms and standing around 13 to 15 inches tall at the shoulders, they usually have a lifespan of 12 to 15 years. Now, let’s get down to top 10 most interesting facts about the Italian greyhound.

The smallest of the Grey hound breeds the Italian Greyhound is believed to have originated over 2000 years ago, in the Mediterranean Basin countries now known as Greece and Turkey, as evidence depiction of miniature greyhounds can be found in paintings and decorated arts in this reason, the Italian greyhounds were quite loved among other breeds in Italy, thus they derive their name from the Italians Italian greyhounds were also quite loved by nobles and Royals, all over the world, some of such nobles and Royals are Queen Victoria, Catherine the Great and Queen mode of Norway, they were in high demand all over the world but after Second World War, due to some designer breeders trying to make the breed even smaller than they already were and failing at doing so, the original Greyhound had almost disappeared after this the breeders came together to return the breed to normal and succeeded and once again from this period onward, up until now, they’re quite famous among various breeds of dogs.

They Don’t Need As Much Exercise as you would think

Although ease are quite agile and energetic breed of dogs, they don’t need as much exercise as one would think they would need their reputation for being racing dogs which leads to thinking that they might require lots of exercise, but that isn’t the case. Usually a few walks a day for about 15 to 20 minutes is sufficient to keep them healthy and happy, and just a brisk walk is enough rather than running.

There Are Great Hunting Dogs

Italian greyhounds were originally bred for hunting, so they are quite good hunting dogs, other famous hunting dogs, such as bloodhounds and beagles usually rely on their keen sense of smell to find out the prey, however it is different in the case of Italian greyhounds being the gaze hounds as they are, they rely on their excellent sight and their speed to find their prey easily and quickly. They’re also found to have a high predator drive.

They Are Extremely Friendly Sweet and Loyal

Grey are extremely adorable and cute. They’re friendly sweet and loyal. They will usually act shy around strangers for the first time but will open up to the person after some time they are family friendly and will always cheer you up whenever you feel down.

There Are Great Watchdogs

Just because Grey our sweet sociable and docile dogs, doesn’t necessarily mean they wouldn’t be good watchdogs, they will often bark at foreign sounds and any stranger approaching their master or themselves. These dogs can get scared easily and sometimes they might be afraid of strangers so they wouldn’t make good guard dogs, they will alert you to any stranger approaching you, however they’re most likely to run away when the stranger shows themselves.

They Respond To The Tone Of Your Voice

Italian greyhounds are really smart dogs, they perceive how the tone of your voice sounds and they tend to act accordingly. So it is advised that you don’t shout at them whenever you are angry as you may end up scaring them.

They Love Getting and Giving Attention

Many people have misconceptions about this dog breed, they believe that Italian greyhounds being a retired rephrasing dogs might have various issues with humans, but this is not really true. Grey are quite loving and understanding breed of dogs, they love receiving attention and just as much as they love receiving attention, they love giving attention as well. They love to cuddle and snuggle with their owners and enjoy quality time with their loved ones. If you want a dog that’ll show you loads and loads of affection, the Italian Greyhound could be a perfect choice for you.

The Shed Less Than Any Other Dogs

Italian greyhounds have only one coat of hair, which makes them virtually shut free and odorless, but that doesn’t necessarily mean that their fur doesn’t shut at all, they need very less grooming compared to other dogs because they have very short hair, although it doesn’t look like it but they shed and it’s just hard to see, it is advised to bathe them once every month and brush their teeth, two or three times a week, as they are prone to gum problems their toenails should be trimmed off and to prevent overgrowth.

It might seem that Italian greyhounds being agile and energetic retired racing dogs require a lot of space to run and play around, but this is not true, they don’t actually mind small spaces at all, it would enjoy living in a house with a small yard or no yard at all, if they get their usual walks, but when they sleep, be sure to give them their space as they love to stretch out was sleeping.

They love others company

Italian greyhounds have been found to be happier in company if other animals, they get along well with other small animals like cats and other small breeds of dogs, they do fine living as the only dog at home but they wouldn’t mind sharing the home and love with other dogs and other animals, if you have another Italian Greyhound living in the house with the first one, it will definitely help them reduce separation anxiety, also they will have someone to spend their time with each other when the owner isn’t around.

Is It Harmful If My Cat Eats Flies?