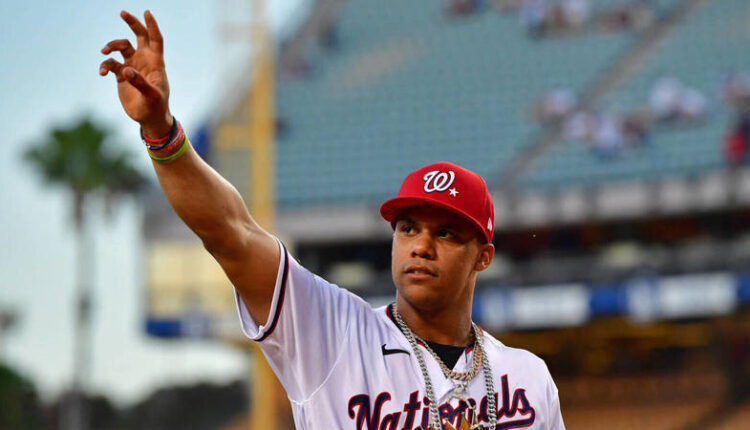 LOS ANGELES – It takes remarkable self-assurance to turn down $ 440 million. No baseball player has ever earned that much in a single contract. Most of us would eagerly sign.

But most of us are not major leaguers, and even within that tight community, there is only one Juan Soto. Few can match his talent, and maybe none can match his showmanship.

The fans did not vote for Soto to start in the All-Star Game at Dodger Stadium on Tuesday. Five outfielders finished ahead of him in the balloting, with Ronald Acuña Jr., Mookie Betts and Joc Pederson winning the starting spots. Soto has not quite played to his career norms for much of this season, and his team, the Washington Nationals, has baseball’s worst record.

Yet Soto is here, and when Soto shows up at a ballpark, remarkable things tend to happen. He found a way to dominate All-Star eve on Monday with his slugging and his fielding – of questions. After spending about an hour in the early afternoon discussing his future with reporters, Soto spent the early evening winning the Home Run Derby.

As a statement of his value, it was hard to be more emphatic.

Love To Hate You’ Season 1, Netflix K-Drama: What We…

“It’s another thing that I add to my trophy case, and I’m going to have it there forever,” said Soto, who outlasted Seattle’s Julio Rodríguez in the finals, after eliminating Cleveland’s José Ramirez and St. Louis. Louis’ Albert Pujols. “And I will be a Home Run Derby champion forever.”

The Nationals would like to keep Soto in their uniform forever, or at least for the next 15 years. They had hoped to entice him by making an offer more lucrative than Mike Trout’s record $ 426.5 million deal with the Los Angeles Angels. But it’s all in the perception.

To Soto and his agent, Scott Boras, the more relevant measure is the average annual value of the proposal: $ 29.3 million, far below Max Scherzer’s record $ 43.3 million in his three-year, $ 130 million deal with the Mets. Soto cannot be a free agent until after the 2024 season, so for now he waits – for a better offer, perhaps, or maybe for a trade.

The Nationals dealt Scherzer and shortstop Trea Turner to the Dodgers last summer, officially signaling a reconstruction. The franchise is up for sale and would like to build around Soto, who is only 23. But at the moment he is something like a Rembrandt at a third-grade art show, a masterpiece painfully out of place.

The Nationals have publicly vowed not to trade Soto, but that was before contract talks collapsed. Boras has made many deals with the Nationals, but on Monday he chastised them for putting Soto on a commercial flight to Los Angeles while other teams paid for charters. The relationship between player and team seems strained, at best.

“All the conversations that they have, they’re going to have them with him,” Soto said, referring to Boras. “I’m just going to be here to play baseball. I’m just going to go to Nationals Park and give me one hundred percent every day. ”

He’s got his clichés down, but otherwise Soto has an aversion to the mundane. He guards the strike zone with such intensity that even taking a pitch can be compelling. And nobody can match his production: Of the 87 major leaguers to appear in 500 games across the last five seasons, Soto ranks first in on-base plus slugging percentage, at .968.

“Competing against Juan, since the day he walked into the big leagues and walked into that Nationals clubhouse in the Show, he’s taken the league by storm,” said the Mets’ Pete Alonso, who lost to Rodríguez in the second round on Monday, ending his streak of two derby victories.

“I like him personally, but competing against him, it’s not enjoyable, because typically he’s doing what Juan does. He’s an excellent player and he’s been there for so many years. He’s a championship player. ”

Soto, who helped the Nationals win the 2019 World Series, was hitting .215 as recently as June 25. Since then he has been almost unstoppable – a .411 average with as many homers as strikeouts (six) and 22 walks. The Home Run Derby should only help.

Last summer in Colorado, Soto spoiled the hyped-up derby debut of the Angels’ Shohei Ohtani, knocking him out in the first round and blasting the night’s longest homer, at 520 feet. By deliberately trying to elevate the ball, Soto said, he unlocked a fly-ball swing that basically turned him into Ted Williams after the All-Star break, with a .348 average, .525 on-base percentage and .639 slugging percentage.

Alonso – perhaps the most enthusiastic participant in derby history – also disputes the theory that the event leads to bad habits.

“Absolutely not,” he said. “I mean, honestly, my second-half performances after doing it have been really, really good. Actually stellar. I think, in a way, the derby kind of locks me in and gets me ready to go for the second half. ”

Soto has nothing to prove to interested teams, but a locked-in version could only raise his extraordinary trade value before the Aug. 2 deadline. If the home run derby was any indication, he will not be distracted at all.

“I’m a lone survivor,” Soto said. “I’ve been going through all this stuff and I’m still here standing up with my chin up, all the time. And that shows you I can go through anything. ”