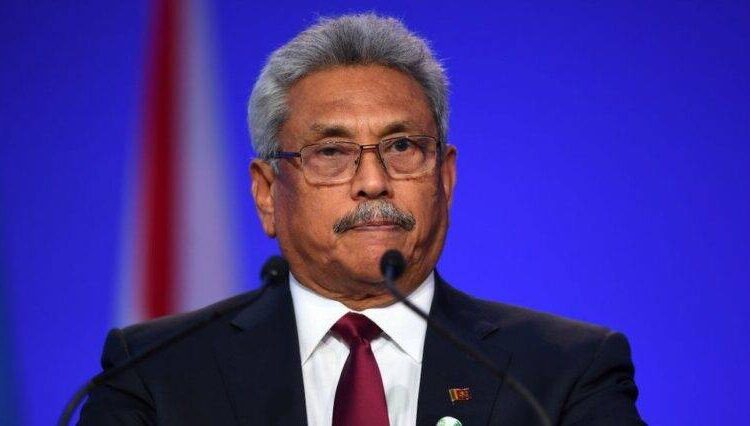 President Gotabaya Rajapaksa has fled Sri Lanka on a military jet, amid mass protests over the island’s economic crisis.

The country’s air force confirmed the 73-year-old flew to the Maldives with his wife and two security officials.

The president has pledged to resign by Wednesday, but an official resignation letter is yet to be received.

In the president’s absence, he has appointed Prime Minister Ranil Wickremesinghe as acting president.

Mr Wickremesinghe declared a state of emergency and told the military to restore order as protesters stormed his office and demanded that he also resign.

Mr Rajapaksa’s departure ends a family dynasty that has dominated Sri Lanka’s politics for the past two decades.

The president had been in hiding after crowds stormed his residence on Saturday, and had pledged to resign on Wednesday.

His arrival in the Maldives, an island chain south-west of Sri Lanka, led to protests there too, with some urging the Maldivian government to stop providing a haven to the fleeing president.

A source told the BBC that Mr Rajapaksa will not remain in the Maldives and intends to travel on to a third country.

His brother, former Finance Minister Basil Rajapaksa, has also left Sri Lanka and is said to be heading to the US.

As Sri Lankans awoke to the news of Mr Rajapaksa’s departure, thousands of people took to the streets of the capital, Colombo. Many gathered at Galle Face Green, the city’s main protest site. Some listened to fiery speeches at a makeshift stage set up for ordinary people to take the mic.

Punctuated by cries of “Victory to the struggle”, the rallying cry of the protest movement, speakers railed against a government and the leaders they feel have failed them.

Police fired tear gas to disperse a group of protesters near the prime minister’s office, but they managed to storm the office and other state buildings.

In an earlier televised address, Prime Minister Wickremesinghe said he had ordered the military to do “whatever is necessary to restore order”.

“We can’t tear up our constitution. We can’t allow fascists to take over. We must end this fascist threat to democracy,” he said.

But many protesters say they will continue their demonstrations until both leaders have resigned from government.

Some demonstrators were furious about Mr Rajapaksa’s departure, seeing a lack of accountability.

“We don’t like it. We want to keep him. We want our money back! And we want to put all the Rajapaksas in an open prison where they can do farm work,” said protester GP Nimal.

But 23-year-old university student Reshani Samarakoon told the BBC that the former president’s exile offered “hope that in the future we can eventually become a developed country, economically and socially”.

For months they have been struggling with daily power cuts and shortages of basics like fuel, food and medicines.

The leader, who enjoys immunity from prosecution while he is president, is believed to have wanted to flee abroad before stepping down to avoid the possibility of arrest by the new administration.

Biden tests positive for Covid-19 and is experiencing mild symptoms