QB Davi Belfort to reclassify in to the 2024 class 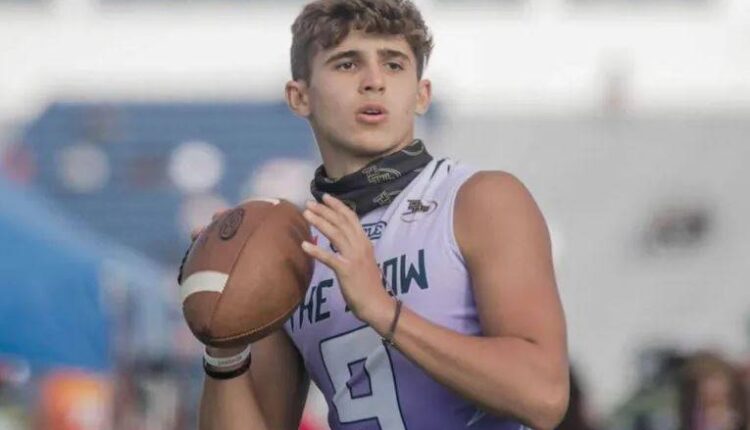 Fort Lauderdale (Fla.) Gulliver Prep quarterback David Belfort has made the decision to reclassify from the ’25 class in to the class of ’24.

Belfort was one of the top quarterbacks in the ’25 class and is a player we had a chance to put eyes on when he was still in middle school. He’s a talented player and the move up a grade will impact and speed up his eventual college decision.

“The biggest reason for me doing this was I just felt ready,” Belfort said. “I felt I was ready from a football standpoint and an academic standpoint and I wanted to push myself, that’s how I raised.

“The ’24 class is the one I’m supposed to be in so I’m excited to compete with the other guys in my class. It’s going to speed up the recruiting process for me but I’ve already had some really good talks with a lot of the college coaches recruiting me and they’re excited about the move for me as well.”

Belfort, who’s the son of former MMA legend Vitor Belfort, said the decision to move up a class is something that he has been thinking about doing for some time now.

“I’ve been taking online courses to catch up and get ahead,” Belfort said. “This is something me and my family have been praying about and we really feel this is the best thing for me and my future. It’s going to allow me to get to college sooner and we’ve always felt, if you want something, be aggressive and go get it.

“It’s a big move for sure but like I said, in my family, we’ve always been about going after what you want, pushing yourself and not sitting back and being satisfied. If you want something, go after it. This is going to push me but like I said, I’m always ready to compete.”

As a freshman, Belfort played at West Palm Beach (Fla.) Cardinal Newman where he threw for 2,016 yards and 22 touchdowns and rushed for another 230 yards and six more scores. He’s a dual-threat quarterback, a pure passer from the pocket but someone who can stress a defense with his legs as well.

He made the move to Gulliver Prep in the off-season and said he’s hoping to narrow his list prior to his upcoming season.

“I want to cut my list to 10 before my season,” Belfort said. “I have a good idea right now and the schools I’m talking to the most now are probably Michigan State, Alabama, Florida, Tennessee, Central Florida, Texas A&M and Penn State. I haven’t visited Tennessee yet but I’ve seen all the other schools and plan to go check out a few games during this coming season.

“I know I’ll be at the Bama-A&M game but that’s the only one I know so far. I know there are players in my class already committing so I would like to lock in my decision sometime after my season or maybe even during the season if I feel good about a school.