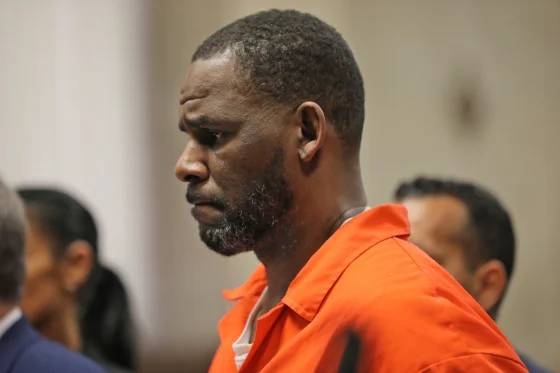 Disgraced R&B superstar R. Kelly was sentenced Wednesday to 30 years in prison, months after he was convicted on all nine counts in a high-profile sex trafficking case.

U.S. District Judge Ann Donnelly handed down the sentence in Brooklyn, New York, after several of Kelly’s victims angrily addressed him at the hearing.

Donnelly minced no words as she threw the book at once-beloved performer.

“You were a person who had great advantages — worldwide fame and celebrity and untold money,” she said. “You took advantage of their hopes and dreams, holding teenagers in your house trapped. You were at the top of your organization, and you raped and beat them, separated them from their families and forced them to do unspeakable things.”

Victims who addressed the court said they had barely any will to live during their time under Kelly’s control.

“You degraded me, humiliated me and broke my spirit,” said a woman who went by Jane Doe No. 2. “I wished I would die because of how you degraded me.”

The victim recalled an incident when she was forced to perform oral sex on Kelly “after you played basketball, in a car full of your friends.”

“Do you remember that?!” she scolded Kelly, who was wearing olive-colored prison scrubs over a long-sleeve white shirt and wore a black mask.

“You couldn’t care less. I avoided your name and your songs and suffocated with fear. What you did left a permanent stain on my life.”

The victim stopped speaking momentarily when she saw Kelly speaking to one of his attorneys and sarcastically apologized: “I’m sorry, I don’t want to interrupt your conversation.”

“You are an abuser, shameless, disgusting,” she added. “I hope you go to jail for the rest of your life. I feel sorry for you.”

Kelly, 55,was convicted in September of racketeering and violating the Mann Act, the law that bans transporting people across state lines “for any immoral purpose.”

The sentence was more than the 25 years federal prosecutors had sought in a letter to Donnelly this month.Jane Doe No. 1, who cried as she addressed the court, said she spent years believing Kelly would never face justice.

“I know there are fans of R. Kelly who don’t believe us,” said the woman, who was 17 when she first met Kelly at a concert in September 1994.

“I once lost hope in our justice system, but you restored my faith. It’s a constant battle, and I no longer live in silence. It is inhumane to endure sexual assault, sex trafficking. It is modern-day slavery in plain sight.”