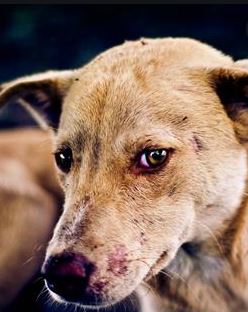 Rabies is a virus that targets the brain and spinal cord and is fatal. Rabies can infect any species, including humans and dogs.

While rabies can be prevented and even treated if identified early on, once symptoms develop, the virus is fatal.

How Can My Dog Get Rabies?

Because rabies is spread through saliva, it is most usually transmitted through a bite wound from an infected animal. The virus can enter the bloodstream when a bite breaks the skin. It can also transmit through an open wound that has been exposed to an infected animal’s saliva, commonly through licking.

While rabies can be passed between pets, exposure to wild creatures such as bats, raccoons, and foxes is the most common cause of rabies in dogs.

Each year, between 400 and 500 instances of rabies in domestic pets such as cats, dogs, and ferrets are documented. Because rabies is 100% preventable with vaccination, it isn’t very frequent in dogs in the United States.

What Are the Symptoms of Rabies?

If your dog is bitten by another animal and you are concerned about rabies, keep a close eye on their behavior and contact your veterinarian right away if you suspect rabies.

Your dog may become restless, irritable, and even aggressive in a short period of time. Rabid animals are also known to be unusually loving. Similarly, if your dog is normally ecstatic and cheerful, they may appear relaxed and uninterested. Fever, trouble swallowing, excessive drooling, staggering, convulsions, and even paralysis are all physical indicators of rabies in dogs to look out for.

As the infection advances, your dog may appear to be overstimulated, causing lighting, movement, and sound to have a negative impact. They may want to hide in a dark, quiet location or act aggressively.

Foaming at the mouth is one of the most well-known rabies signs in dogs. Excess saliva or drooling may be seen instead of “foaming” in some dogs. This indicates that the virus has advanced. Seizures and progressive paralysis are frequent in the later stages of rabies. Dogs at this stage are unable to regulate their muscles, particularly those in their head and throat, making swallowing difficult. Breathing becomes impossible at some point, resulting in death.

Before symptoms appear, the virus might be present in your dog’s body for weeks. In dogs, most cases appear between 21 and 80 days following exposure, but the incubation period can be much shorter or longer. Because rabies cannot be treated once symptoms appear, it’s critical to contact your veterinarian as soon as your dog has been bitten rather than waiting to see.

How Is Rabies Diagnosed and Treated?

Rabies is difficult to diagnose using a blood test. Testing requires a biopsy of brain tissue to be 100 percent correct, thus it can’t be conducted until the animal has died.

There is no method to treat rabies in dogs once symptoms develop. Unfortunately, if your veterinarian feels your dog has rabies, he or she may be euthanized to prevent the virus from spreading.

If your dog is bitten by a wild animal, a rabies vaccination booster may be given to reduce the risk of your dog contracting the virus.

How Can You Prevent Rabies?

The best approach to keep your pet safe from rabies is to vaccinate them on a regular basis. In fact, in many places, rabies treatment is required for dogs.

The vaccine benefits your dog in a variety of ways. Vaccinating your dog not only protects them from rabies, but it also protects them if they bite someone. If your dog bites another animal or a person, the first thing that will be asked is whether or not your dog is up to date on their vaccinations.

You can eliminate the risk of rabies transmission by showing that your dog has received the rabies vaccine. If your dog’s vaccines aren’t up to date, he or she may be quarantined or possibly euthanized because of the risk. Dogs that have bitten people must be confined for at least 10 days to check for rabies.

Avoiding contact with wild animals is another way to avoid contracting rabies. Keep your dog on a leash and be mindful of your surroundings at all moments. Free-roaming animals are more likely to come into touch with wild animals and become infected with the virus.

What if I Come Across a Rabid Animal?

If you suspect rabies saw a wild animal acting strangely, contact your local health department or animal control. Do not attempt to catch the animal on your own. Instead, maintain a safe distance, warn others in the area, and contact the authorities.

What if My Dog Has Contact With a Potentially Rabid Animal?

You or your veterinarian should also make a report with your local health agency. This way, the offending animal may be identified and removed from the area, ensuring that no other creatures are hurt.

Keep in mind that if your dog was bitten, you could contract rabies from the wound, so don’t touch or clean it without using disposable gloves.

What Causes of Dog Vomiting