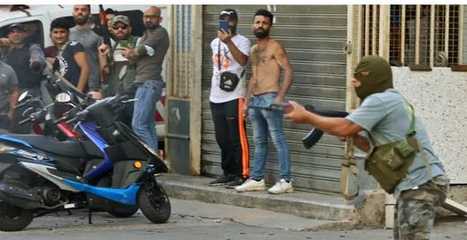 At least six people were killed in Beirut’s worst street violence in 13 years, when hundreds of armed militiamen rushed to the streets and part of the city was put on lockdown due to heavy fighting.

The bloodshed took on a sectarian tone, conjuring images of the Lebanese civil war and scared citizens who had long feared that the country’s numerous issues would erupt into a catastrophic inferno.

A demonstration by members of Amal and Hezbollah, two primarily Shia political groups, against a judicial probe into a major blast in the city’s port last year sparked the skirmishes near the justice courts, which left dozens more injured.

The violence began with sniper fire from residential structures, which was met with AK-47 assault weapons and rocket-propelled grenades by the demonstrators. Hezbollah alleged that militants from the right-wing Christian Lebanese Forces opened fire on protestors.

Soldiers were sent but were unable to quell the violence, which was centered near a civil war-era frontline where Maronite Christian and Shia Muslim forces had previously clashed.

Many citizens in the area where the shooting began favor the blast inquiry and see efforts to halt it as an attempt by one side of the country’s fractious politics to assert supremacy. Others saw the investigation’s conclusion as a continuation of Lebanon’s political impunity, which has meant that crimes involving the country’s prominent brokers are nearly never solved.

Snipers opened fire, aiming at people’s heads, according to Interior Minister Bassam Mawlawi. He claimed that all of the dead came from one side, referring to Shias. Shia politicians urged supporters not to “be pulled further into” the fighting.

Throughout the day, however, large crowds of men armed with weapons took to the streets, and gun trucks carrying Hezbollah and Amal flags paraded through the Bekaa Valley in a show of strength not seen since Hezbollah overran west Beirut in May 2008 during a brief conflict with Druze leader Walid Jumblatt.

On Thursday afternoon, army trucks rumbled through typically deserted Beirut streets, as ambulance sirens wailed as the injured were transported to local hospitals.

Chants of “Shia, Shia, Shia” could be heard near the frontlines at times. On motorbikes, Christian men and adolescents gathered in other regions.

Children were evacuated from their classrooms in adjoining schools and forced to crouch in corridors as the fighting broke out, in scenes reminiscent of the civil war that tore Lebanon apart from 1975 to 1990.

The leaders of Amal and Hezbollah, Nabih Berri and Hassan Nasrallah, have become increasingly vociferous in their opposition to the bombing probe, which is being conducted by Tarek Bitar, a judge. They accuse him of interrogating only certain lawmakers, the majority of whom are Hezbollah allies.

The outcome of the probe is widely regarded as a make-or-break moment for the state, which has made little headway in identifying the perpetrators of one of the worst industrial tragedies in recent history. On Thursday, a judge dismissed a second attempt to depose Bitar, who had issued arrest and interrogation orders for many former ministers and senior officials.

The Beirut port had been a microcosm of Lebanon’s politics, which is ruled by fiefdoms and plagued by widespread bribery, leading to bankruptcy. Stakeholders at the port gates stayed faithful to the political rulers who have remained in power since the civil war ended.

Up to 2,750 tonnes of weapons-grade ammonium nitrate igniting after a fire alleged to have been sparked by welding work triggered the devastating disaster on August 4, 2020. The fireball obliterated the bulk freight terminal and much of the surrounding neighborhoods, killing at least 215 people and igniting a long-running debate over an unaccountable political class.

Demands for an investigation into all aspects of the explosion, on the other hand, appear to be nearly impossible to meet, with ministers summoned for questioning refusing to appear, others filing lawsuits against Bitar, and yet more directly linked to claims of negligence not being implicated at all. Aside from that, any regional dimensions, which have long been a source of conjecture, appear to be much beyond the judge’s abilities to investigate.

António Guterres, the UN Secretary-General, urged all parties to stop the violence and refrain from provocative actions and inflammatory speech.
Both parties have been putting pressure on Lebanon’s new government, led by Prime Minister Najib Miqati, to either drop the inquiry or replace the chief judge. After a run-in with politics, a previous judge was fired.