The job market is beginning to show cracks 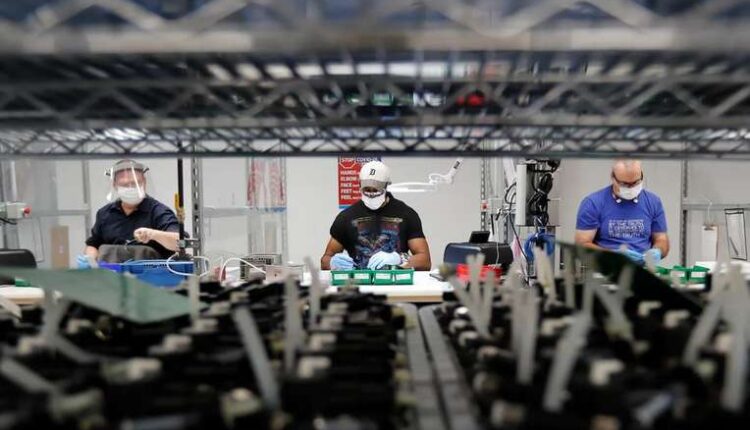 Matt Miller thought he was getting a promotion when he met with his boss on Tuesday. Instead, he got laid off.

Business at the Pennsylvania art industry firm where he worked had been brisk until a few months ago. But lately, jitters about the crashing stock market and a possible recession had many regulars tapping the brakes on new purchases.

“Over the last three months, sales dropped 50 percent, then 50 percent again, until they were basically at zero,” said Miller, 32, who is worried about future job prospects. “Most of our clients were in real estate or tech, and they’ve just disappeared. They don’t want to spend $10,000 on a painting if they’re worried things are going to crash in a few months.”

The labor market, until now a pillar of economic resilience, is showing cracks.

Job growth is slowing, unemployment claims are ticking up and several big companies, including Apple and Meta, are putting hiring plans on hold. There are signs that more firms are slashing jobs in industries as varied as tech, advertising, health care, finance and law.

Everything About Madelaine Petsch, Her Wiki, Biography,…

All About Sara Blonde, Her Wiki, Biography, Net Worth,…

Convenience store chain 7-Eleven laid off 880 corporate workers in Texas and Ohio, following its purchase of a rival chain, a company spokesperson said an email. Ford is planning to cut 8,000 positions in the coming weeks, Bloomberg News reported. Meanwhile, electric carmaker Rivian is cutting 700 positions, delivery start-up Gopuff is laying off 1,500, and mortgage lender LoanDepot is slashing 4,800 jobs this year, according to reports.

“What had been universally positive labor market news is certainly less so now,” said Liz Ann Sonders, managing director and chief investment strategist at Charles Schwab. “The anecdotes are starting to stack up of companies laying off workers or freezing hiring or limiting job postings.”

The number of active job postings across multiple online platforms has declined nationwide for five straight weeks, according to an analysis by Julia Pollak, a labor economist at ZipRecruiter.

Meanwhile, first-time filings for unemployment benefits rose by 7,000 last week and are up 51 percent from mid-March, although they are still near historic lows, Labor Department data shows.

The cooling of the hot labor market is, in many ways, exactly what policymakers have been trying to engineer. Next week, the Federal Reserve is expected to raise interest rates for the fourth time this year in hopes of slowing the economy enough to control inflation without leading to widespread job losses or recession. The Fed expects the unemployment rate to gradually rise from a near 50-year low of 3.6 percent to 4.1 percent by 2024 — with the hope that most of the slowdown comes in the form of fewer job postings and hirings instead of job cuts and layoffs.

But achievingthat balance can be tough. Labor economists say they’re increasingly worried that the picture could quickly sour.

“Things have slowed down — in some places, pretty sharply,” said Guy Berger, principal economist at LinkedIn. “There’s nothing right now that looks like we’re experiencing a recession, but at some point we can easily tip into rising layoffs and unemployment. The range of [layoff] anecdotes and where they’re coming from is getting broader.”

This latest reckoning follows two years of torrid jobs growth, marking the fastest labor market recovery in history. Nearly all of the 20 million jobs lost in the early weeks of the pandemic have been recovered. U.S. employers created more than 6 million jobs in the past year alone, and job openings continued to outpace job-seekers by nearly 2 to 1 in May.

But a broader slowdown in other parts of the U.S. economy is beginning to have ripple effects on the job market.

The most pronounced cool-down, Berger said, has been in the tech industry, which experienced rapid growth during the pandemic. Tech hiring has fallen 9.1 percent in the past month, compared with a 5.4 percent dip in hiring across all industries, according to data from LinkedIn.

The number of tech firms and start-ups laying off workers has picked up in recent weeks. Netflix, Tesla and Coinbase have all announced job cuts or hiring freezes. Vimeo, the online video platform and onetime tech darling, announced this week it was laying off 6 percent of its staff.

“We are making this decision in order to ensure we come out of this economic downturn a stronger company,” Anjali Sud, the company’s chief executive, said in a memo to employees. “The reality is that the challenging economic conditions around us have impacted our business. We must assume that these conditions will remain challenged for the foreseeable future, and that we aren’t immune.”

Recession fears can be self-fulfilling: If families and businesses begin pulling back because they’re nervous about their financial futures, that can be enough to trigger a downturn. Until now, Americans have continued to spend heavily, particularly on services as well as food, gas and other necessities, even as prices go up. But economists warn that could quickly change if job losses pick up — or Americans begin to cut spending because they worry they could lose their jobs.

Silicon Valley braces for tech pullback after a decade of decadence

Neal Kemmerer lost his job at a robotics company in Lafayette, Ind., four weeks ago. Since then, he’s applied for at least 300 jobs — and gotten one interview.

Far more frequently, he’s notified that positions he’d applied to have been suspended or closed, he said. It’s a far cry from January, when he had his pick of four job offers.

He was making $48,000 a year as a site leader for Starship Technologies, which makes food-delivery robots. But most of the openings he’s finding now arein manufacturing for companies such as Subaru and Caterpillar, and the wages max out at $19 an hour, or less than $40,000 a year, Kemmerer said.

During the pandemic, many workers saw their earnings rise for the first time in years. However, wage growth is beginning to taper off, particularly with rising inflation factored in. Average hourly earnings have risen more than 9 percent in the past two years, while prices are up about 15 percent in that same period.

The waters are pretty steady right now but there is a bit of churn up ahead,” said Nick Bunker, director of economic research at Indeed’s Hiring Lab. “The Fed is still hiking interest rates. It’s unclear how unsteady the ride might get.”

Katherine Loanzon, a legal recruiter in New York City, says there’s been a marked slowdown in hiring, especially among firms that specialize in corporate law. Mergers and acquisitions are down, as are initial public offerings.

Some major law firms, she said, have frozen hiring even though they continue to list postings on their websites. Others are suspending pay raises and taking much longer to hire attorneys.

“People are much more careful than [during] 2021’s corporate hiring frenzy,” said Loanzon, managing director at Kinney Recruiting. “We haven’t seen layoffs yet but … that’s usually the next step.”

Seven ways you can financially prepare for a recession

Some of the very workers who were ceremoniously courted and hired in 2021 are among those being laid off now.

Pete Basgen was happily employed at a tech firm last fall when he was approached by recruiters at a live-stream software firm with a 40 percent pay increase and the promise of building his own creative strategy team. He took the position in November and managed to hire a handful of employees before he — along with most of his team — was laid off last month. Executives at the San Francisco firm were worried that business would quickly dry up if there was a recession, he was told.

“They poached me from my last job, offered me a very big salary and a whole lot of equity, then laid me off,” he said, adding that he wasn’t at the company long enough for the stock benefits to kick in.

Many of the companies he’s talking to now, he said, are eager to hire consultants or contract workers, but wary of bringing on a full-time salaried employee.

“It feels like a very different economy than it was in November,” the 37-year-old said.

Ethan Engel lost his data analytics job in Phoenix this month after the international insurance firm he was working for canceled an 18-month contract halfway through. All 60 people on the data-digitalization project got laid off.

“From what we heard, it was because they saw this recession coming, and that was the end of it,” said Engel, 24. “There wasn’t really a whole lot of new work coming in.”

Engel has spent the past three weeks applying for dozens of jobs in data analytics, defense, aerospace, banking and insurance, but has yet to land a single interview.

On Tuesday, he signed up to become an Amazon delivery driver. If he gets the job, it’ll come with a 30 percent pay cut.

“I finally had to say, ‘Okay, I need to find any kind of work,’” he said. “I need to have some money coming in.” Checkout latest world news below links :