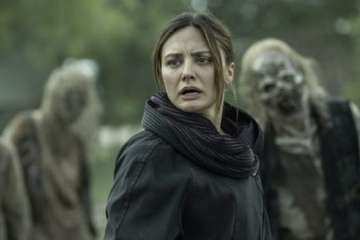 AMC announced a new series centered on Rick Grimes (Andrew Lincoln) and Michonne as well as provided the first peek at The Walking Dead’s last eight episodes before to its panel at San Diego Comic-Con (Danai Gurira).

The new limited series, which will premiere with six episodes in 2023 and center on their ongoing love story, will be teased by Lincoln and Gurira, who startled the audience by making an appearance at the very end of the Friday panel.

The forthcoming series, according to executive producer Scott M. Gimple, would replace a previously teased film on television. Gimple said to his followers, “We appreciate your patience and hope it was worthwhile.

The two stars, who are now filming their upcoming spinoff series Isle of the Dead, Jeffrey Dean Morgan (Negen) and Lauren Cohan (Maggie), also made an appearance in a pre-recorded video piece.

We are so close to and invested in the conclusion of The Walking Dead, Morgan added.

He hinted that Daryl and Carol might have some romantic moments in the future (Melissa McBride). According to Reedus, the Carol-Daryl saga is still ongoing.

The quieter parts of the show’s run over the years, according to McBride, were some of her favorites. She observed that in those brief stand-alone scenes, “it seems like you learn a whole lot more about characters.”

The final eight episodes of Season 11 will premiere on October 2 on AMC. The trailer is provided below.