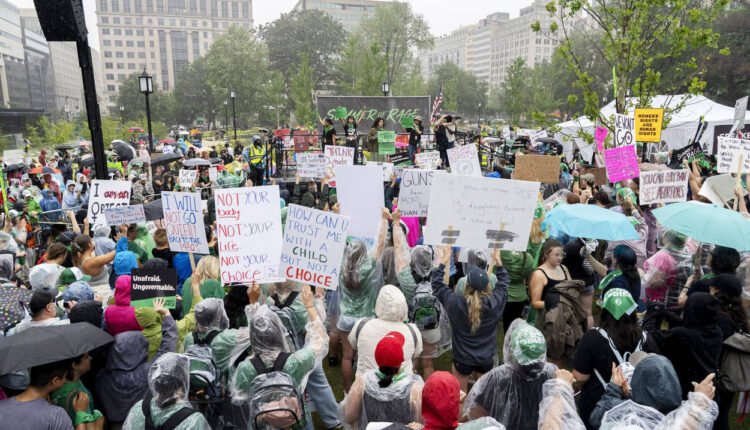 Thousands turn out for Women’s March in D.C. to pressure Biden on abortion rights

The Women’s March organization rallied on the streets of the nation’s capital Saturday to “fight for abortion rights” as nearly two dozen states move to ban the procedure following the Supreme Court’s reversal of Roe v. Wade two weeks ago.

Thousands of protesters gathered in Franklin Square Saturday morning before heading to the White House in the afternoon.

The rally aims to pressure President Joe Biden and his administration to declare a national public health emergency on the issue and take executive action to protect abortion rights, according to the Women’s March.

The demonstration came a day after Biden signed an executive order directing the Department of Health and Human Services to boost access to abortion pills and protect access to emergency medical care and family planning services, including various types of contraception, the White House said in a news release.

The order also seeks to protect patients’ privacy and access to accurate information as well as promote the safety and security of patients, providers and clinics, the White House said.

“Yesterday was a good first step, but it’s just that, a first step,” said Rachel O’Leary Carmona, the Women’s March executive director, before a riled-up crowd of protesters Saturday. “We know there are limits to President Biden’s authority, but we want him to push that authority to the limit.”

An emergency declaration from Biden can unlock additional funds and resources to help local governments meet the demand for reproductive health services, according to the Women’s March. It can also open the door for the federal government to leverage additional resources to curb the negative impact of abortion bans in certain states.

On Friday, Louisiana joined nine other states, most of them in the South, that have outlawed abortions.

So far, Ohio, Tennessee, South Carolina and Florida have restricted access to abortions but have not banned the procedure. Eight states have pending abortion bans that could go into effect later in the year.

Lawmakers in Pennsylvania, one of the 21 states where abortion is still legal, took the first step to amend the state constitution Friday, giving voters the choice to declare whether abortion should be a considered a constitutional right as early as next year.

Instead of a mass march similar to the one organized in May following the leaked Supreme Court draft opinion overturning Roe, organizers of the Women’s March have described Saturday’s demonstrations as “targeted civil disobedience,” even hosting trainings for attendees ahead of the event in response to the increased likelihood of arrests.

Hannah Warren traveled from New Jersey to take part in the demonstration Saturday. She joined a training session Friday night before joining crowds in front of the White House Saturday.

After demonstrators made it to the White House amid rain, with many wearing green bandanas, they started chanting “bans off our bodies” and “stand up Joe Biden.”

A sit-in that lasted about 45 minutes was also set up directly in front of the White House fence.

No arrests had been reported as of early Saturday afternoon.