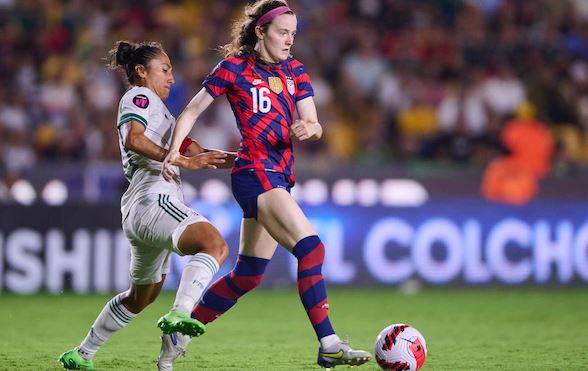 Alex Morgan scored a penalty late in the second half to guide the United States to a 1-0 victory over Canada in the CONCACAF W Championship final in Monterrey, Mexico, on Monday night.

The game was a rematch of last summer’s Olympic semifinal game, which Canada won 1-0 before going on to win the gold medal in Tokyo, with the victory securing the USWNT a spot in the 2024 Olympics in Paris.

“It always feels good to be called a champion, so this game just feels good to us,” Morgan said after the match. “Canada gave us a run for our money, but we prevailed and we feel good about it.”

Both teams continued to have chances in a back-and-forth opening 45 minutes, with Sheridan somehow keeping Sofia Smith’s shot from point-blank range out just before the half ended 0-0.

Smith missed another golden opportunity just after the hour mark. After outrunning the Canada defense to a perfectly weighted through ball from Morgan, Smith rounded Sheridan but slipped as she went to shoot into a wide-open goal, with her effort ending up in the side netting.

Canada’s Allysha Chapman fouled Rose Lavelle in the penalty area in the 76th minute and Morgan sent Sheridan the wrong way with her spot kick to put the US into the lead. It was Morgan’s 118th overall career goal for the USWNT and she finished as the player of the tournament at the W Championship.

“I wasn’t with the team the last eight months,” Morgan added. “So I could just focus on San Diego and that helped me mentally and physically and then coming back to the team my role just increased and that felt good.

“I feel good overall, I’m happy, healthy and confident and feel like I can contribute exactly what is being asked of me. So I’m in very good shape right now.”

Canada had a flurry of late opportunities, including a header from substitute Jordyn Huitema that went wide, as Andonovski’s side saw out the result.

The win extends the USWNT’s overall record in World Cup and Olympic qualifying matches to 60-1-1, with the lone loss coming against Mexico in 2011.

In the third-place match, Jamaica beat Costa Rica 1-0 in extra time with a Kalyssa van Zanten goal, earning the right to take on Canada next September for the second CONCACAF place at the Paris Olympics.

All four teams – the US, Canada, Jamaica and Costa Rica – had already secured spots at the 2023 World Cup in Australia and New Zealand by virtue of reaching the semifinals of the W Championship.