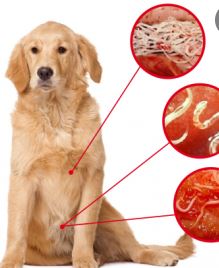 Worms in dogs can lead to a variety of health issues. Here’s a brief overview of the most common dog worms, along with links to more detailed articles on how these worms can infect your dog and how to prevent and treat them.

The roundworm, which is usually introduced by feces or during pregnancy or breastfeeding, causes a serious infection in dogs and puppies. The roundworm feeds on the host’s food, causing diarrhea and other symptoms. Roundworms can be lethal in pups. Deworming products for dogs, both prescription and over-the-counter, are quite effective. When people get roundworms, their symptoms can be even worse than when dogs get them.

Hookworms are parasitic worms that feed on the blood of their hosts. They live primarily in the small intestine. Puppies can contract the disease from their mothers. Adult dogs might become sick by licking themselves or washing themselves. They can also become infected by eating an infected animal. Infection causes weakness and malnutrition in puppies, and it might even result in death. Although two doses of deworming medication are usually sufficient, a puppy may require additional treatment. Hookworms can also be acquired by eating unwashed vegetables or walking barefoot in sand and soil.

Heartworms are spread to dogs by mosquito bites. A heartworm can grow to be 14 inches long and lives in the heart and arteries that carry blood from the heart to the lungs. Heartworms influence how the heart works and how blood clots, and if left untreated, they can lead to death. Heartworm prevention is effective when taken on a monthly basis. If your dog is infected, he or she may cough, have difficulty breathing, and show other symptoms. Two or three injections of arsenic-based medications may be required, followed by at least three months of rest.

Whipworms can be found around the intersection of the small and large intestines. They feed on their hosts’ blood here. Dogs can take them up by grooming or from contaminated dirt. When there are high numbers of whipworms embedded in the colon, they can produce bloody diarrhea. Whipworms can be controlled with some heartworm preventives, and whipworms can be eliminated with an oral dewormer.

Tapeworms are spread by fleas, which are eaten by dogs. The intestine where tapeworms attach absorbs part of the dog’s nutrients. Each segment of the tapeworm is about the size of a grain of rice. These are excreted in the dog’s feces and can be observed near the anus. Tapeworms can be killed with an injection or a pill. Humans can get tapeworms as well, but they do not obtain them from infected pets.

Ringworm is not a worm, despite its name. It’s a fungus-caused skin illness. Ringworm in dogs usually appears as a dry, gray, scaly patch, although it can also go unnoticed. It appears as a round, red lesion with a ring-like appearance in humans. Ringworm is contracted by dogs when their skin comes into touch with the fungus’ spores. Spores can be detected in the soil and on cats. The spores can be found on a cat even if it is symptomatic. It can be contracted by touching an infected pet. Ringworm in dogs can be treated with medication dips, shampoos, or ointments. For one to two months, your dog may also require oral medication. Other steps may be required to eliminate ringworm from the environment or prevent its spread.