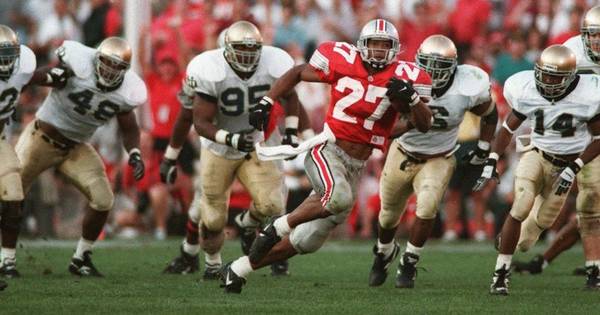 Every once in a while, the Ohio State legend will send the picture to his friend and Notre Dame alum Jerome Bettis as a not-so-gentle-reminder of the past.

This is one of those weeks. You’ve seen the picture.

It’s George – in a scarlet “27” jersey – angling toward the open field at Ohio Stadium with a white towel flapping to the side – an almost Heisman pose that foreshadowed what was to come later in that 1995 season. The background is every bit as important here. Count the Notre Dame defenders in white jerseys trailing behind George. One, two, three, four, five, six, seven …

“He sends me an emoji back – with one finger,” George told Sporting News.

George’s run, which was part of a 207-yard, two-TD effort that launched his Heisman Torphy campaign, endures as a symbol of the Buckeyes’ dominance – maybe even arrogance – toward the Irish. It’s not Michigan, but it’s damn close.

“It’s right up there,” George said. “The team up North is No. 1, and right under that I would have to think it’s Notre Dame.”

That mural greets incoming passengers at John Glenn International Airport in Columbus. You’ll see it in countless sports bars and man caves. It’s the “Take that!”  moment from the home-and-home series the Buckeyes swept in 1995-96.

It’s back this week ahead of No. 2 Ohio State and No. 5 Notre Dame’s prime-time matchup on Saturday at Ohio Stadium. Do a quick Eddie George search on social media. That picture is all over the place.

“It was a great microcosm of how that game went,” Letterman Row’s Tim May, who covered the game for the Dispatch, told SN. “Here is the entire Notre Dame team chasing Eddie George. That, and Ohio State dominated that game with so many big plays on offense.”

Bobby Hoying passed for 272 yards and four TDs. Terry Glenn caught an 82-yard TD pass. It was George’s 61-yard run that set up his own three-yard TD to put the game away in the fourth quarter. Fullback Matt Calhoun had the lead block. George followed All-American tackle Orlando Pace. George remembers the sequence with remarkable accuracy.

“I remember ’19 Toss’ to the left side, and Orlando was playing left tackle,” George said. “I pretty much took the pitch and saw a lane on the inside and stretched it enough to create a natural lane. Once I kind of got through that hole, I burst toward the sideline and tried to have the backside safety run longer than he had to run.”

Shawn Wooden caught George, but not before the damage was done.

George has an oil painting of that play in his house, too. That might be the Mona Lisa – Mona Eddie? – in Columbus. It’s more like The Battle of Waterloo in South Bend when you consider the gap that has grown between the programs since that home-and-home in 1995-96.

The George run marked the proverbial changing of the guard.

“Notre Dame was the standard at the time,” George said. “They were still a top-25 team in the country. They were very capable of winning ball games. Coached by Lou Holtz, disciplined football team, focused and talented.

“That was the top ticket in town at the time,” he said. “It was highly anticipated, and we felt like as a team if we beat Notre Dame we had a great chance of being considered for a national championship.”

“It had been coming, in my opinion,” May added. “I don’t think anybody thought Notre Dame had more talent than Ohio State from a collection standpoint.  (Ohio State coach) John Cooper had been recruiting better nationally at that point.”

Now, it’s on the Irish to respond. Ohio State is a 17.5-point favorite. George, now the coach at Tennessee State, said he will check the score on the flight back from the Tigers’ opener against Eastern Washington.

“I’m good friends with Marcus Freeman and Ryan Day,” George said. “Of course my allegiances are to Ohio State. It’s Ohio State alliances all the way around. It will be interesting to see how that plays out.

“We’ve had tremendous success against them,” he said. “You almost have to figure that they are itching to get one out of this, but not this weekend.”

That’s the firm loyalty George still holds for the Buckeyes, and that picture elevated his icon status with the program. George sends those texts to remind Bettis that, “All 11 defenders were behind me.”

The legendary photo caught seven to prove it.

“It was an iconic game; an iconic picture for sure,” George said. “I’m glad I was on the receiving end of it. It was a great angle by the photographer. The perfect time against the perfect team on the perfect day.”